I have a clarinet sextet arrangement (in finale) with Eb soprano and Bb bass clarinet staves.
When played back, these are the wrong pitch, in that the Bass clarinet is (for instance) sounding an octave too high.
The Eb soprano part is sounding wrong too, since for both I chose "clarinet" as the voice used.

I want the score to look the same, (as the players part would look), but need the playback to be an octave lower (as it should sound).

Since I am exporting this to SmartMusic, this is critical.
Do I adjust the playback pitch in SmartMusic or where?

thanks... this is probably simple....

Is your score set up in Concert Pitch? Did you set up the score with the Wizard? (If you use the Wizard, the correct transposition will be automatically entered.)
Finale 26.3 | SmartScorePro 64
Mac OS 10.15.7 Catalina
Copyist for Barbershop Harmony Society
Top

The result was a pretty good file with few mistakes. After correcting everything it looked great!
That part is pretty amazing in itself.
So I have a great Finale file, problem is that to get the bass clarinet part to sound in the correct octave, I transpose it down p8th all right, but the written pitches all go down an octave too (I don't want that).

Are you saying that (when "display in concert pitch" is OFF), that I can transpose the part (sound) without changing the written part?
thanks for your answer
G
Top

I'll admit from the start that I'm not very clear on transposing instruments. Having said that, take a look at the screenshots. I set up a bass clarinet staff from the Wizard, and selected the key of C. It gave me a treble clef staff, with two sharps. I selected Display in Concert Pitch, and it changed to a bass clef, no accidentals.

I entered a C scale in the bass clef starting in the second space. It played back in that correct octave. I turned off Concert pitch, and the staff changed back to treble, two sharps, with the scale starting on the D. Looking in the Score Manager (which you don't have in 2009) the Transposition shows as (Bb) Up M9, Add 2 Sharps, Treble Clef. So everything makes sense.

When you scanned in your score, Finale had no way of knowing that it was a transposing instrument. So my feeling is that if you have the notes you want to see in the treble clef, you have to copy them, an octave and a second lower, and put them into the bass clef, viewing in concert pitch. Then, in your Instrument List, change the INSTRUMENT (in the left-hand column ) to bass clarinet. That will apply the correct transposition to the score, and give you both what you want to see, and what you expect to hear. 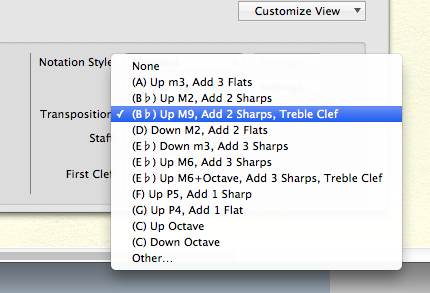 Thank you for your explanation.
I did manage to get a working SmartMusic file with the pitches correct, but it was a long process of trial and error,
so I'm still unclear as to exactly how I did it. It does stem from scanning in the first place and that the results need to be adjusted to allow for the "automatic" compensation for the transposing instrument.
Yes it's not clear how to re-establish the transposition correctly for playback, but it definitely can be done.
I should upgrade to 2011, so I'm happy that I DID get it to work in 2009.
SmartScorePro10 is amazing! In the scanning I did, (from score) there were very few note mistakes (unlike previous attempts with SmartScore (regular) which shipped with Finale. Some very complex scores (like a full orchestra score) may still be a challenge though because the note images are so tiny in a 20+ stave score!
However hats off for getting this to work as well as it does. It took me 10 hours to fix a 6part, 169bar score, but there was about half of that spent fumbling around with the transposition problem. In this case it should have been about 5 hours, which would be the time correcting the scan errors (which as I say were minimal).
Thanks for taking the time to delve into this, I'm sure that Finale 2011 has addressed this process path and a clear explanation is pending.... many teachers/musicians are interested in OCR music scanning because of their reliance on SmartMusic as the real working platform.
G
Top

I've just joined the forum because of the following problem that seems related to this post:

1. A wind quintet score wa imported from a TIFF file using SmartMusic.
2. I told SmartMusic that the 3rd staff was for a Clarinet in Bb.
3. The resulting Finale file correctly shows the clarinet part transposed to the key of F. (The concert key is Eb.), with the first note being an A, which should play as a concert G.
4. When I "display in concert pitch", the correct note, a G, is displayed.
5. The playback, however, sounds the WRONG NOTE, i.e. a concert F, one tone lower than the correct concert G.
6. The Score Manager shows the correct transposition for the Clarinet in Bb, "Up M2,Add 2 Sharps".
7. I changed the instrument to Soprano Sax in Bb just to see if this would fix the playback problem, but the wrong note, a concert F, still played.

I'll upload an abriged file showing the first page of this quintet. There are a lot of other routine things still to fix, but I am stumped with the clarinet playback.
I am using Finale 2014.5 running on Windows Vista.
I must be missing something obvious. Much appreciated if anyone tell me how to get the right pitches to play.

Oh Oh, my file was rejected for upload with the error message "The extension musx is not allowed," but this is the extension Finale 2014.5 uses. Am I in the wrong forum?
Top

To post a .mus or .musx file here, it must be compressed (zipped) and cannot exceed 100 kb in size.
Finale 26.3 | SmartScorePro 64
Mac OS 10.15.7 Catalina
Copyist for Barbershop Harmony Society
Top

Thanks, Miker. I'll try again now with a zipped file.

The culprit is that all the Clarinet notes are “flattened” by two half-steps, and the accidentals are hidden.
An example:
The Clarinet’s very first note looks like an ‘a’, but it is actually an ‘a♭♭’ where the note accidental
(double-flat) is hidden.

By The Way:
The pickup measure displays incorrectly as a whole rest in Flute, Oboe, Clarinet, and Bassoon.
I would enter a quarter rest.
Mac OS X 10.15.7 (Catalina), Finale user since 1996
Top

It was a simple solution that worked perfectly.
I am amazed. Seems like magic.
May I ask the secret of how you found out that the notes were double-flattened and the accidentals hidden? Did you have a way to "un-hide" them, or was it maybe a guess that you had to verify by trial and error? New territory for me.
Thanks so much for your help.
Top

StephenG wrote:…May I ask the secret of how you found out that the notes were double-flattened and the accidentals hidden? Did you have a way to "un-hide" them, or was it maybe a guess that you had to verify by trial and error?…

The first clue was this:

Obviously you meant SmartScore, not SmartMusic.
It is well known that Music OCR programs like SmartScore do some weird, crazy things when interpreting “the little dots”.
You have to spend some time “cleaning up the mess” after the OCR.
Some other examples in the document you attached, are the pick measure, and the missing triplet 8th definitions, causing some of the measures to get “overfilled” with regular 8ths.

In some cases there is so much “mess clean-up” to do that it is faster to enter the music manually, from scratch.

Another clue was the fact that notes entered manually displayed and played back correctly in the Clarinet staff.

The final proof came from the (very technical) dialog box Edit Frame which revealed that each note was lowered by two half-steps, and that the note accidentals were hidden.
Mac OS X 10.15.7 (Catalina), Finale user since 1996
Top

Got it. I never thought to try entering a note manually and checking the playback on that note. Also did not know about Edit Frame. Have spent quite some time fixing dots,triplets, wrong notes, and measures with funny meters in various scores, and have to agree it might be a good idea to just work on speeding up my manual entry skills. Still, some scores seem to OCR better than others. With your help I was able to get through this one. Thanks very much.
.
Top

StephenG wrote:…have to agree it might be a good idea to just work on speeding up my manual entry skills…

I have the same problem as StephenG: a score imported to Finale 25 using SmartScore, and one of the parts (the Horn part) is playing the wrong pitch even though it displays fine. I even copied it to a new piece and transposed to bass clef, the problem remained.

Peter, I followed your suggestion and used the Edit Frame dialog box to check each measure for hidden accidentals. I unchecked the "Freeze Accidental" checkbox for every note it was selected on, and my first four measures went from this:

So it is no wonder the playback was wrong. It sounded like it was in Dorian mode...

Is there any way to do this operation for every note in the part in one operation, perhaps a plug-in? I am running Finale 25 so there are very few plug-ins available, but I have a copy of 2014.5 available for another day (until the trial period runs out!).

Peter, thank you. I ended up using the canonic utilities to clear frozen accidentals, then the command to remove all accidentals. I had to restore the correct accidentals, but all told the time to fix the piece was only a couple of minutes. Now the piece plays back correctly.

So, no way to erase hidden accidentals in the whole piece "at one fell swoop", while keeping the visible ones? Erase all accidentals and re-type the good ones can be an extremeley long operation...
Yours,
M.
Top
Post Reply
17 posts • Page 1 of 1