Here's a question for users who don't have an Option key: can Finale 26.3 for Windows notate triplets when a measure begins with a rest? The version I have goes to great lengths to avoid notating a triplet, especially a quarter/eighth triplet, even predictably completing a 4/4 measure with rests to make it 7 eighth notes in length or 15 sixteenth notes in length. I see both.

I've already tried the obvious things, such as rebooting, making sure no other software is open, and so on. I'm wasting significant amounts of time trying to do a simple thing, something that Finale 98 made easy. Please don't tell me how it works in Finale 26.3 for Mac. That's not what I have. (Of course, if you're on a Mac but know why it doesn't work on Windows, I'd like to know. It might be a memory allocation problem arising from non-OO code.) 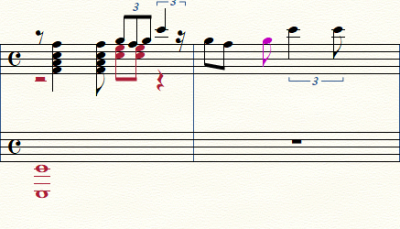 In the image you can't see the Finale "preview" cursor, but if you could it would show that active note entry is for eighth note triplets. In the first bar you can see that Finale has completed the last eighth-note triplet with a sixteenth rest. That's obviously related to why it won't accept another triplet eighth note. In the next measure I was trying to work backwards. The quarter/eighth triplet worked when it was the only thing in the measure, but once it was there, as you can see, entering eighth note triplet (with the associated preview cursor) simply resulted in three non-triplet eighth notes. Mind you, this screen shot is right after rebooting and with no other software open.

Follow up. A couple of weeks ago, I asked for help entering Cyrillic lyrics in Finale 26.3 for Windows, and a knowledgeable gentleman provided the trick to get this working. While that solved the question I was asking, it also taught me all the other problems that Finale has when lyrics use Cyrillic glyphs. It's no longer possible to notate a song with both piano and voice in one file because of the problems that arise when Finale has Cyrillic lyrics. That makes notation more tedious, but it's possible to merge voice and keyboard files. In other words, the Cyrillic programming issues in Finale 26.3 are happening not at the rendering phase but at the input phase.

What I hadn't thought of was that Cyrillic glyphs in text areas would also break Finale 26.3. I hadn't thought of that because (1) text areas accept Cyrillic without a problem and (2) I had not previously tried to notate with a song title (in Cyrillic) already in place. After submitting the above question, I removed the Cyrillic title from the document, closed the document (but did not exit Finale) and then re-opened it.

Now entering triplets in the keyboard part works fine. Seems like once Finale is handling those extended ASCII glyphs certain kinds of temporal calculations go awry -- almost like a divide-by-zero error that's handled, but just barely. Nothing crashes, but it doesn't work right, either.

POSTSCRIPT: It's possible that the Cyrillic issues I'm having only arise when the music has more than one voice per staff -- or perhaps more than one note at a time per voice -- which of course is normal in keyboard music. Finale for Windows seems designed to work best for band music and similar educational materials.
Top

Mike Rosen has a web site with tutorials:
http://www.specialmillwork.com/finale-tips-and-tricks/

There is a tutorial for tuplets with the Simple Entry Tool.
I recommend that you study Mike’s tuplet tutorial - in case you have not already done so.
Mac OS X 11.6.2 (Big Sur), Finale user since 1996
Top

I've never had problems with Cyrillic lyrics. Can you post an example?

If you're on Windows, you don't have an option key. Use the Alt key instead. Pretty much, Option = Alt.

Is this what you're trying to do in the first measure? (Except for the pitch of the last eighth note!)

I appreciate that forum people take the trouble to answer, but the reason I began the post with the statement that I was looking for a response from a user who doesn't have an option key is that Mac users do not seem to realize that Finale for Windows is different software. It simply doesn't work the same way, it's just supposed to. Explaining how Finale works on Mac doesn't help a Windows user. If Finale for Windows were priced differently than Finale for Mac it would be more obvious that they are different programs. Instead, they cost the same but the Mac version is clearly more stable and reliable than the Windows version. Every time I get a useful hint from this forum -- and I'm grateful for all of them -- the hint comes from a Windows user. Mac users seem to be in denial about Finale for Windows, and they frequently respond by referencing an incomplete learning curve on the user's part. This user is well aware that he has an incomplete learning curve; that's why I'm asking for help. But my learning curve is a Finale for Windows learning curve that Mac users for the most part can't imagine.
Top

No, Windows doesn’t have an Option key. Oddly enough, it does have an Alt key, which works the same way, and you would have known, had you looked at the user manual.

Have you looked at your User Manual?

You’re moaning about the Cyrillic lyrics, but you haven’t posted a single example or document that shows the problem.

There is nothing that Finale for Mac does, that Finale for Windows can’t do. Nor have you told us what version of Finale you’re using.
Finale 26.3 | SmartScorePro 64
Mac OS 12.3.1 Monterey
Copyist for Barbershop Harmony Society
Top

I'm surprised you've gotten anything done in Finale if you don't know about the Alt key.

The Mac version of Finale is no more stable than the Windows version. They each have their own set of quirks and bugs.

There are indeed bugs with tuplets at the end of measures in Simple Entry but they can be worked around. You would do well to learn the basics of tuplet entry involving Alt-9 instead of struggling with mouse entry.
Top

I'm no expert but I do this:

How did you get the movie to upload? I have one that shows my method, much quicker than yours, but I can't load it. I'm using Quicktime on a Mac.
Finale 26.3 | SmartScorePro 64
Mac OS 12.3.1 Monterey
Copyist for Barbershop Harmony Society
Top

To answer the question in the title of this thread: Yes, it can. If you just bother to learn how to.
Finale 26.3
Windows 10
Top