To all the intelligent engravers/notation experts on the forum:

I am re-engraving/editing a chamber music score when I came across this measure in the piano part. The music was entered by someone else, but it is exactly what appears in the urtext. Even though Finale tells you that there are too many notes in the measure, it was apparently left to me to figure out. And I am having a bit of a time figuring it out. I welcome opinions as to what might be the best possible solution.

the Original is how it appears in the score currently.
Options A, B, C are my educated guesses as to what would be the most correct way of presenting this. (there also may be an Option D, if someone out there can enlighten me to something that I haven't considered.
Thanks for your time and executive brain functions in advance.

for the right hand, to me, at least it seems like the dots are superfluous.
User of Finale since version 3.0 on Windows.
Now using a mix of Finale 2012, Finale 25, and 26.1
GPO, Garritan Solo Stradivari violin, Gofriller Solo Cello.
XSamples Chamber Ensemble.
New convert to NotePerformer3.
Top

Additionally, the right hand note values should probably be eighths. There are 6 sixteenths in a 3/8 measure; any number less would be eighth value, as I understand the rule. For the LH, I choose B.

Gentlemen,
Thank you for your intelligent opinions. I will ponder how to proceed.
Obviously I have to consult with the publisher, and see what he wants to do, but your responses are appreciated.

yes, those dots with tuplets (and 16ths!) are kind of an old school way (and I'm talking 1980's old) of notating in compound meter.
There is a lot of it going on in this movement alone-still have a 4th movement to parse. but that one measure was so obviously wrong that I'm now starting to re-think the whole movement.
Thomas Smith
Guitarist, Composer, Arranger, Engraver
Finale 26.1, iMac 27" Mojave 10.14.4
Korg M1 (vintage 80s)
www.thomasmithmusic.com
www.milmontparkmusic.com
Top

I would suggest this simplest way. 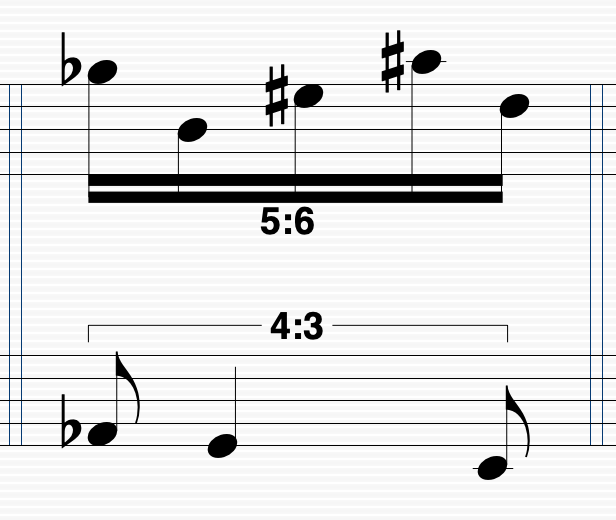 I think having tuplets and dots both here is in fact wrong notation. You're showing 5 sixteenths* in the place of 6 ordinary, undotted-sixteenths, or 4 eighths in the place of three undotted eighths, so the components of the tuplets should also be undotted. So Wess's solution, with or without the "colon numbers" seems best, but *modified as per N. Grossingink to be eighths, not sixteenths, in both hands, for the reason he states. 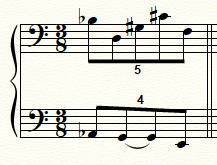 (Interestingly, in Speed, if you type Ctrl-5 and then try to enter 5 eighth notes in the 3/8 bar, it doesn't do the above--it wants to put the last note into the next measure. You have to use Ctrl-1 to set up the tuplet.)
Top
Post Reply
8 posts • Page 1 of 1