A small question of asthetics:

With lyrics, Finale doesn't extend the 'phrase-end dash' (what's the terminology for this, actually?) over a double barline (see pics).

Is there a way to manually extend it? 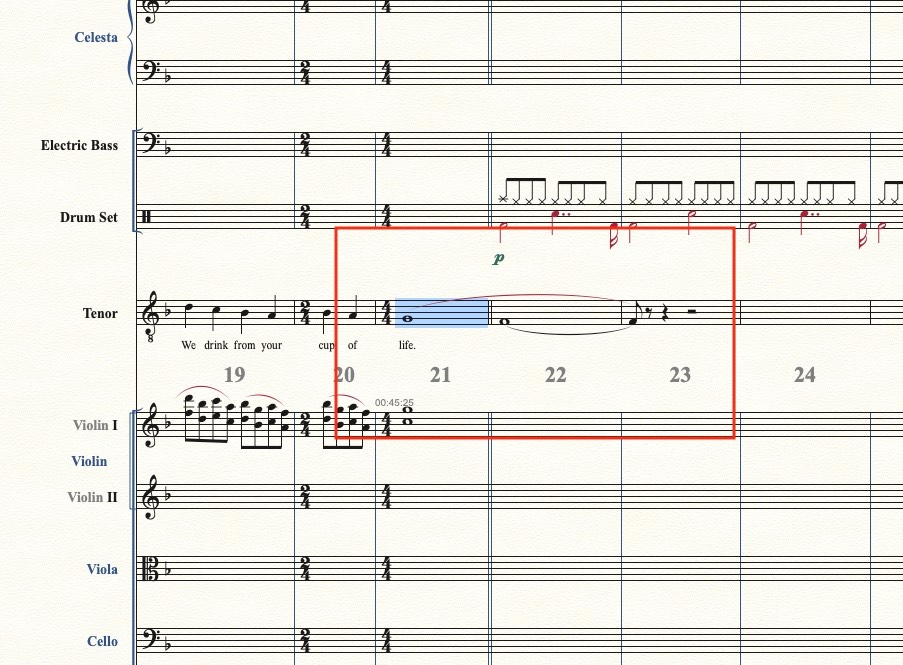 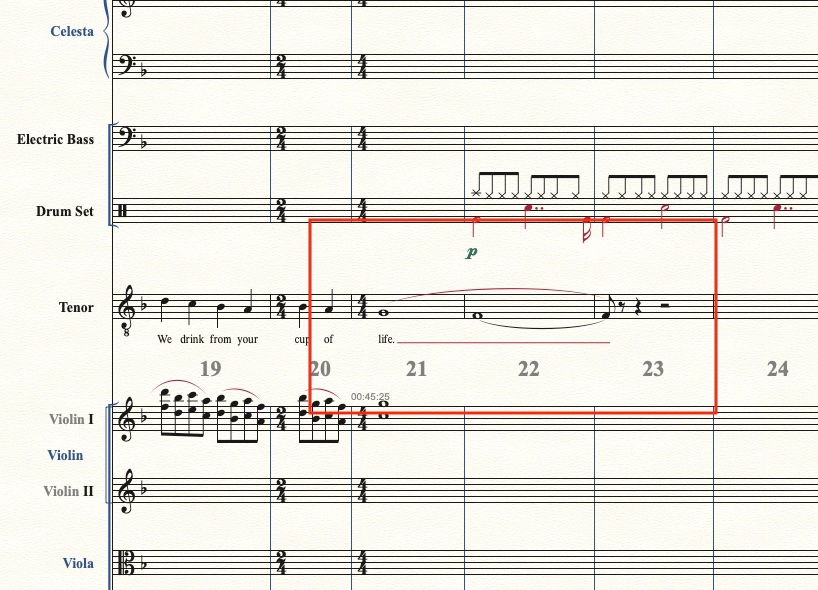 It's called a ‘word extension.’ While in the Measure Tool, double-click on the bar which ends with the double barline, then in Measure Attributes untick the option ‘Break Smart Word Extensions.’ I think that should do it, but please come back if it doesn't.
Finale 25.5 & 26.2.2
Mac 10.13.6 & 10.14.6
Top

I abandoned word extensions long ago and have never had a complaint, even from tenors.

I don't get warm and cuddly agreement here on the board, but I think the slur and tie is enough, even for tenors.

I only use word extensions to clarify something.

Bill Stevens wrote: ↑
Mon Dec 02, 2019 11:28 pm
I abandoned word extensions long ago and have never had a complaint, even from tenors.

As a tenor, I'd certainly complain.

Word extensions explicitly convey the information that the next notehead is also to be sung to the same syllable. Maybe that is now to be expected -- what else are you likely to do on a long note, that wouldn't be indicated by another syllable? Though it wasn't always the case, and contemporary music sometimes requires singers to make all sorts of changes across notes: closing to a hum, etc.

But perhaps you could say the same for other notation, such as similar 'extension lines' for aleatoric passages. If we got rid of anything that was conventionally understood as the default, we'd hardly have anything left!

Perhaps it's simply familiarity, but scores without them look bleak and unfinished, IMO, and make me hesitant and unsure.

Worse still, is something I've seen recently, where single notes, like a dotted minim, get an extension.

As a singer, I rely on them. My choir sang the Messiah a couple of years ago, and the edition we used did not have them. I put mine in by hand.
Finale 26 | SmartScorePro X2
Mac OS 10.13 High Sierra
Copyist for Barbershop Harmony Society
Top

In looking at this thread, I was reminded of a bug introduced in 2014 that MakeMusic has acknowledged, but it appears has not been fixed as of v26.2.1. When one enters certain barlines, Finale automatically checks the option to break Smart Word Extensions, which is usually the required behavior. However, if one wants the SWE, all one has to do, as discussed here, is to go into measure attributes and uncheck that option. This works for double barlines, which is the subject of this thread. However, this fails to work properly for a Backward Repeat Sign. It seems okay at first, but after saving, closing, and re-opening the file, the box is rechecked. In other words, the program doesn't maintain the setting. MakeMusic confirmed this errant behavior, but they have chosen not to fix it yet (or maybe they can't, I don't know).

So, my advice for those situations where a SWE is needed over a Backward Repeat (which might never be needed) is to uncheck that option every time the file is re-opened. If printing is needed to be done, make sure not to just open and print. Otherwise, the SWE will not be there. Another workaround is to enter a Smart Shape line manually to emulate the SWE.

Perfect! Thank you everyone, tenors or not!

Have a great day.
Top

Word extensions should definitely be used for melisma. Messiah is a great example.

If it’s just to extend the length of a word, I don’t use them. Redundant when ties are present. Ok, perhaps tenors do need them but I’m a deep bass so what do I know?
Mike Halloran

I really never did any or much vocal work until we got a new vocal teacher that needed help with Finale. Since, to me, singers never seem to do the same thing the same way twice, I try to put every mark or instruction in exactly the way it is to be sung. But these are high school kids.
Finale 26 - Perfect Layout - Windows 10
President, The Shawnee Concert Band
Top

Having thought about exactly what it is that a extension line conveys, I've come up with the following:

An extension tells you not to 'close' the syllable (e.g. final consonants or vowel modification) on the current notehead, but keep going to the next notehead. Once you're on a notehead with no line running beyond it, then you close the syllable when the duration ends.

An extension running across a rest explicitly tells you to keep singing the same syllable. Without the extension, you would normally close the syllable at the rest.

Imagine a note with a lyric but no extension, followed by 15 bars' rest, and then a new note without any lyric.

Now imagine the same notation, but without the rests.

Both notations tells you the same thing: that you have one note to one syllable, and a new note with an unknown lyric. Common sense might lead you to continue, but that's not what's written.

Obviously, you've got to sing something, and much of this may be at the subliminal level. But I think it helps.
Top
Post Reply
11 posts • Page 1 of 1