Anyone here know anything about the cimbasso? It's a sort of bass valve trombone, which I've seen Verdi use in lieu of a tuba. Someone on Facebook said they used Change Instrument to cimbasso and Finale gave it a Bb transposition, bass clef. I only know it from Italian opera, where it's a non-transposing instrument. Is it perhaps used in band music and notated transposed? Treble or bass clef?

Or did MakeMusic put every instrument they could think of in the instrument list, Google "cimbasso" and see mention of an instrument physically in Bb, and jump to the conclusion that it's notated that way?
Top

The cimbasso is now well (re)established this side of the Atlantic, primarily for Italian opera. When I saw Scottish Opera's touring production of Tosca in Inverness a year ago, the fourth trombone part was played on a modern cimbasso. In its current incarnation it is a valve contrabass trombone designed to be played by a tuba player, and in an orchestra uses the same notation as the bass tuba (ie non-transposing bass clef).

If used in a band, I suspect the transposition (or not) would depend on the particular national and other conventions around band transpositions.

I have written for the instrument myself, and it is readily available in UK and European opera orchestras. I believe Hans Werner Henze used two in one piece, and also that various film composers have written for multi cimbassi. Its sound is rather similar to that of the contrabass trombone, although it is less free blowing while also less cumbersome to play (although contrabass trombones such as those made by Rath http://www.rathtrombones.com/#p=contrabass-trombones are far, far more manageable than those of 25 years ago. As a result, the contrabass trombone too has been fully revived where appropriate. eg Scottish opera used one in Falstaff not very long ago.)
Last edited by David Ward on Mon Oct 19, 2020 4:36 pm, edited 1 time in total.
Finale 25.5 & 26.3
Mac 10.13.6 & 10.14.6
Top

I know it as a non-transposing instrument. The Vienna Symphonic Library page on the Cimbasso is quite helpful and correct: https://www.vsl.co.at/en/Brass/Cimbasso
Finale 3.0-25.5, German edition, Windows 7
trombonist, pianist, conductor / Recklinghausen, Germany
Top

That's interesting, David, because Falstaff is written for Bass Trombone rather than Cimbasso (the part goes down to a low F), as is Tosca.

Major companies in the U.S. like the Met use cimbassi as well, but I don't know if they use them as a substitute for trombone.
Top

In Verdi's time all trombones (in Italy) were valve trombones. This explains some of the acrobatic passages in e.g. Rossini operas. And "true" cimbasso (again, in Verdi's time) was a bassoon-like wooden instrument with cup mouthpiece. The modern cimbasso - a formidable instrument in its own right - is maybe too heavy for some Verdi/contemporary writing. Some sources recommend narrowbored tuba as better substitution. See picture and more info here: https://www.berliozhistoricalbrass.org/cimbasso.htm .
Top

You are not thinking of writing any music for one? Good luck finding somebody that has one or knows how to play it.
The contrabass trombone is rare enough and is also difficult to play too.
Finale 26.3.1.520 - Perfect Layout - Windows 10
President, The Shawnee Concert Band
Top

I know nothing about these legacy instruments. However, this talk took me back to my Freshman year at Chapman University (College back then). In our music supply room in the very old music building were 2 instruments that I had never seen before. One was an upright piano with a full pedal board, for organists to practice. The other was a Sarrusophone. I'm guessing it is also in a category of instruments that had their day, but are hard to come by today.

When I was in the University Symphony at Berkeley the conductor wanted me to play the ophicleide in the Midsummer Night's Dream overture--the department had one! I thought it would be fun, but I'm a horn player and it had a trombone-like mouthpiece and I didn't want to risk my embouchure on it since there were other pieces to play on the program.

You are not thinking of writing any music for one? Good luck finding somebody that has one or knows how to play it.
The contrabass trombone is rare enough and is also difficult to play too.

No, this came up on Facebook. Someone used Change Instrument to change from tuba to cimbasso and was surprised to see two sharps added to the key signature when he did.
Top

Now that I look at a picture of an Ophicleide, maybe that was the instrument we had. I heard people call it Sarrusophone, but they may have been wrong.

Brass instruments seem to be like yoghurts today. They come in all tastes and shapes.
Finale 26.3
Windows 10
Top

I don't think the cimbasso, at least in its modern incarnation, should be thought of as a ‘legacy instrument’. Most (maybe all) medium and large opera houses in the UK & Western Europe use the instrument regularly and it should be available to the symphony orchestras if required. It's purpose for a modern composer would be to provide a contrabass sound which blends easily with the trombones without requiring a fourth trombone player, but instead can be played by the regular tuba player. During the last few decades it has become a normal modern instrument in many circles and its current incarnation is still undergoing improvement and refinement. There are several makers of the instrument.

The Cimbasso has become a pretty standard instrument for "brassy" film scores. In addition to seeing it in the studio these days, many of the better brass sample libraries that cater to film composers also include the Cimbasso in their library.
Top

I don't think the cimbasso, at least in its modern incarnation, should be thought of as a ‘legacy instrument’.

Sorry about my misunderstanding.

I have been a trombone player/teacher for decades upon decades. It would be a real challenge to make a living being a cimbasso or contrabass trombone player.

Nothing if you are comparing one of them to a good bass trombone player like Edward Kleinhammer or Charles Vernon. And, that is probably why you don't see them.
Finale 26.3.1.520 - Perfect Layout - Windows 10
President, The Shawnee Concert Band
Top

I was hoping for a more serious answer this time. There must be some reason for the cimbasso still being used. And if not in sound, maybe in playabilty?
Finale 26.3
Windows 10
Top

I was hoping for a more serious answer this time.

That was a reality answer. The contrabass trombone is not an easy instrument to play. They are extremely expensive for their possible return, too.
I have never played a cimbasso so I can't comment on its playability. I think, at least I heard, KU has one but I never saw it or touched it if they do.
Finale 26.3.1.520 - Perfect Layout - Windows 10
President, The Shawnee Concert Band
Top

I would imagine, being valved, it's more facile and more capable of playing legato.

From what I've seen in Verdi, the cimbasso's range is more akin to a regular bass trombone, the larger-bore instrument in Bb with two thumb triggers.
Top

Just a little fun, but this may be of some interest in the context of this thread. This recording uses a mixture of tenor, bass & contrabass trombones, together with both cimbassos (cimbassi ... ? ) and bass tubas.

It is truly impressive, but, perhaps not meant to be taken seriously ...

Nobody has mentioned the Miraphone Python tuba. 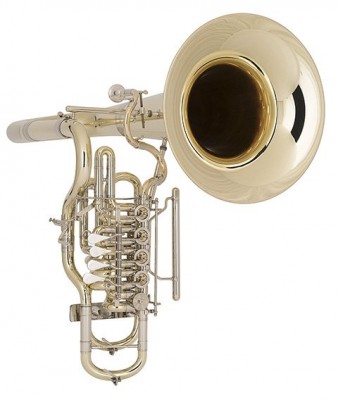 ebiggs1 wrote: ↑
Wed Oct 21, 2020 3:28 pm
Nothing if you are comparing one of them to a good bass trombone player like Edward Kleinhammer or Charles Vernon.
- - -
That was a reality answer. The contrabass trombone is not an easy instrument to play.

I was thinking more along the line that the instrument generally sounded this or that way in the hands of a sufficiently skilled orchestra musician, not a prominent soloist (they can make any instrument sound very different from what you'd expect).

To my ear, and I'm well used to hearing both cimbasso & contrabass trombones in opera orchestras, where both are perfectly regular and normal, at least this side of the Atlantic, the difference between cimbasso and tuba is huge. The tuba has a much rounder and ‘fatter’ sound than any kind of trombone, while the cimbasso sounds like a natural contrabass to the trombones and blends with them. This gives an Italian rather than a German sound to the orchestra.

Use of the tuba in Verdi's orchestra is now rather frowned upon in the UK and Western Europe, although one still encounters it in many (but not all) performances of the Requiem.

Puccini only ever wrote the bottom brass part for "Trombone basso." Is a contrabass trombone and a bass trombone the same thing?
Top