Hello, I have a new question:

I'm writing a score that requires several graphics. I'm placing them using the "Graphics Tool" in the page view, but the graphics disappear depending on the zoom and the scroll position, I don't know why.

The curious thing is that everything goes perfectly when I print any page. I mean, it's not really a problem but a bother, because it's difficult to place correctly the graphics when you can't see them (now I'm printing on PDF, checking the document and fixing in Finale).

Does anybody know how I could solve this issue? Thanks in advance.
Top

I have not encountered the problem you describe, so this is just a shot in the dark:

Could the culprit be a hardware limitation?

I don't think so, because my laptop has a good graphics card. I use it even for videogames and works fine...

Anyway, I have just realized that if you set the zoom to 100% and move the vertical scroll bar until you find the right position, all the graphics are showed perfectly. Maybe that's not the smartest way, but it works.

I have a graphic that I pasted-in very early on and now want to remove it. But I can only see it when printing, otherwise it is hidden so I can't delete it. I know my graphics card is not the problem. I tried the zoom fix galdrusa suggested, but I am not sure I quite understand what you did there. Any fix, no matter how backward, would be great! Thanks.
Top

3) Move the vertical scroll bar until you find the right position, and all the graphics are showed perfectly.
Mac OS X 10.14.6 (Mojave), Finale user since 1996
Top

Thanks for the explanation. I had a similar type of mystery fix for changing the lyric font.. for all I know it works only for me. Unfortunately your fix did not work for me. Luckily, it's only one page and copying and pasting into a new document seems to skip the unwanted graphic.
Finale PrintMusic2011 on PC
“A musician must make music, an artist must paint, a poet must write, if he is to be ultimately at peace with himself.” ~ Abraham Maslow
Top

I am having the same problem.
Really need an answer.
Top

DrPatti wrote:I am having the same problem.
Really need an answer.

If the suggestions above do not help you, then I think it is time that you contact MakeMusic's Tech Support.
Mac OS X 10.14.6 (Mojave), Finale user since 1996
Top

Did anyone ever figure out this problem? I'm having something similar, and desperately need to fix it! Have tried everything, but can't seem to simply "unembed" graphics. 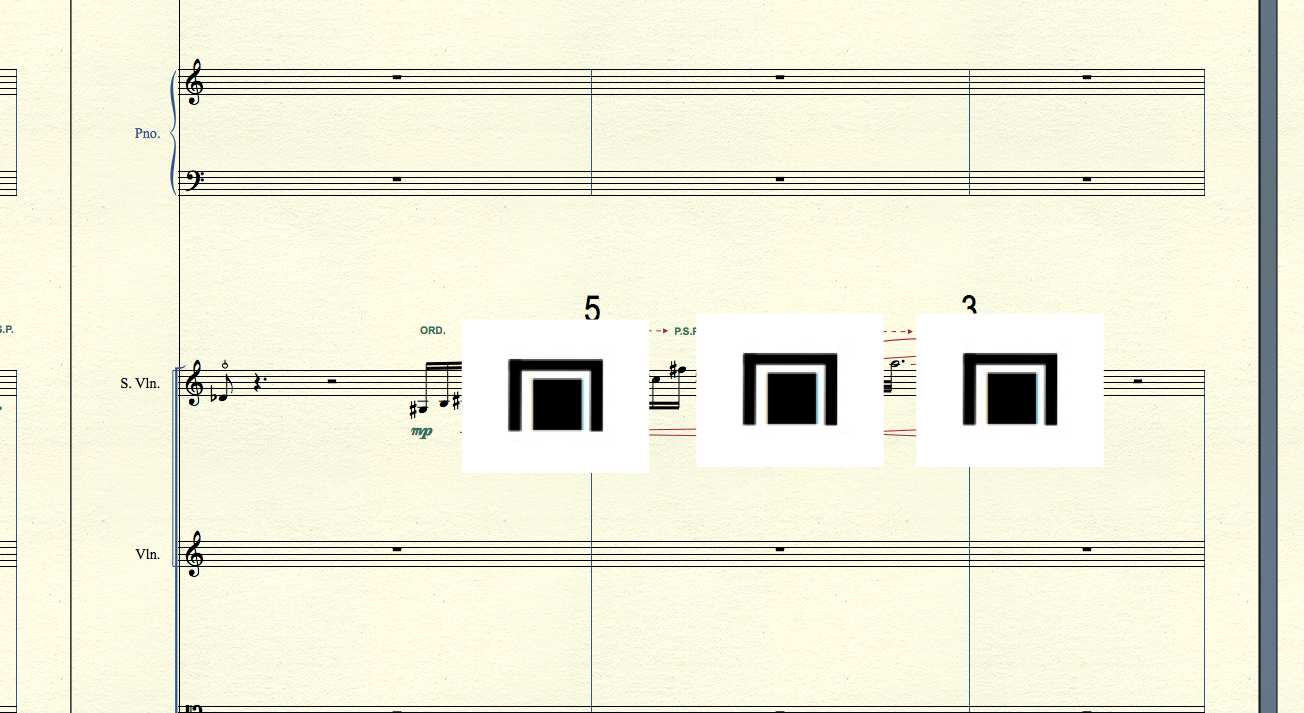 Here's one fix. This problem arose today for me for the first time (August 2017, Finale 25.3). My graphics disappeared on screen in Finale and could not be selected for editing (even the little guide rectangles usually disappeared), but they did appear when opening in Preview or other PDF viewers (usually misplaced and outsize). I had inserted them by double-clicking on the page and selected them in a Mac file window and Finale automatically embedded them.

My fix was to use the Check Graphics command from the Graphics menu. I then highlighted the graphic -- they all just said "(embedded)" and clicked Check Attributes. From there I attached them to measures instead of the page, e.g. meas. 10, meas. 20, etc. They were listed as being something like 40 inches tall and negative 13 inches wide! I suspect the negative width is a sign of the glitch. I reduced most to 10% by 10% and clicked OK and then Done.

Then I switched to Scroll View, and the offending graphics were visible. I selected the Measure tool and highlighted a range of measures, including all those with graphics attached and a couple before and after to be sure. Next under the Edit menu, I chose Clear Selected Items. From the dialogue window that resulted, I selected None and then re-selected Graphics (attached to measures). Voila, the troublesome graphics were gone.

I upgraded (free) to Version 25.4 and was able to reinsert and edit graphics in the same file without problems. Maybe just going straight to the most recent version would have fixed the problem -- worth a try if you are having this issue. But at least there's a workaround to find and delete graphics that start playing hide and seek.
Top

Upon encountering any difficulty at all with a graphic, I'd be inclined to either change the file format or open and resave the file. Mac users can do this within Preview. I've had problems with TIFF files which have been saved with "LZW Compression" applied, usually in Photoshop. Opening and resaving in Preview strips out any unneeded encoding. I've always had good luck with EPS files in Finale. You can substitute PDF for EPS - it's about the same thing anyway.

Some of the post here are quite old. In several older versions of Finale, there was a bug in which graphics would not appear correctly on the first page in some View Styles. This has been fixed in at least Finale 25, if not earlier.
Top

I found Christopherjhoh's solution of attaching the image to a measure very useful.

Up until now, I waited until finishing the score before adding any graphics, like an ossia as an image. I never did find out what kind of editing causes a successfully embedded image to disappear, with no possibility of adding another to the document. To add the image again, I would have to copy and paste the measures into a new document then place the graphic.
Top

The clue with embedded was the trick for me. Before I clicked "embed" I saw nothing on the screen for my design, after that the image stayed.
Top
Post Reply
15 posts • Page 1 of 1