I'm working on some music for strings and piano for an audio track. Whenever I am working on the piece, and I have Finale open for 5 minutes, or even just play back the 50 seconds of music 1 or 2 times, the playback starts to have a clicking sound every time the music changes to some of the chords that have a lot of notes in them. When I close and re-open Finale, the playback works fine with no clicking noises... for a few minutes, then the clicking noises happen again. In the past, I've had scores with 25 staves, and I've never had these clicking noises before.

The clicking noises don't happen in any other use of my computer. They don't happen when I'm listening to music or watching a video, for example. They are only happening in Finale playback. Does anyone know what could be causing these clicking noises? Attached is a Finale file.

This is in addition to the other thread I recently posted (this one viewtopic.php?f=6&t=19196 ), also in the "Playback Issues" forum, which I still haven't found a solution for that problem either. But since this is a different problem, I wanted to post a separate thread. Maybe the problems are related, but I don't know. I didn't want to muddy up the other thread by posting a different problem.

potential causes for this:

1 - insufficient RAM on the new laptop.
2 - some background process that is causing drops in available RAM or disrupting playback.
3 - a combination of the two above.
User of Finale since version 3.0 on Windows.
Now using a mix of Finale 2012, Finale 25, and 26.1
GPO, Garritan Solo Stradivari violin, Gofriller Solo Cello.
XSamples Chamber Ensemble.
New convert to NotePerformer3.
Top

I'm not sure, but I believe I was using "Direct Sound". I looked in the "Sound" settings of the Control Panel, and in the "Audio" settings in Windows Settings, and I was not able to find anything which indicated whether I am using "Direct Sound" or "ASIO". I then downloaded "ASIO4ALL", and when I opened Finale, Windows gave me a notification which seemed to indicate that ASIO4ALL was being used. When I played it back, I was experiencing the same clicking problems as before. Then after I tried to change the buffer size within ASIO4ALL settings, Finale wouldn't play back at all, it would just sit there stuck on measure 1 beat 1. I'm guessing before I installed ASIO4ALL, I was using Direct Sound. But I really have no idea. Before I installed ASIO4ALL, I wasn't able to find anything that told me I was using "Direct Sound" or "ASIO".

In my default settings for my speakers "Realtek Audio", the sample rate is 48000Hz and the bit depth is 24 bit. I wasn't able to find anything else about my settings.
Finale 25 (Windows 10)
Garritan Personal Orchestra 5, SmartMusic SoftSynth, Magnus Choir, Garritan Instruments for Finale
Top

As far as the sample rate, I had to set the Realtek to 41000 to match Finale. That might help in your situation.

Update: I did a bunch of testing with jumbled results. I don't really know what to conclude with this. Below is a bunch of information.

When I changed the string voices (Violins, Violas, Cellos, etc.) from "[Instruments] Lush Mutes" to "[Instruments] KS" -- that completely got rid of the clicking noises. I guess in a way, that solves it, but then I can't use the "lush mutes" voice, which is a very convenient voice to have available. Below is the post I wrote while in the process of doing all this testing, with various information in it...

Ok, attached are the audio settings I have in Finale. I tried it both with DirectSound and ASIO. Both gave me the same clicking noises after about 40 seconds of playback. Once Finale has played back enough music (in this file), it starts giving me clicking sounds when it plays back chords that have a lot of notes in them. Even when I go back to the beginning of the piece (after 40 seconds of playback), it starts giving me clicking noises even on chords where it didn't during the first playthrough. Attached are screenshots of both sets of settings I used. Also, in both of these cases, I changed the buffer size to both the lowest amount, and the highest amount, and in both cases, the clicking sounds still happened, almost exactly the same amount. When the buffer size was at the highest value, the clicking sounds happened slightly less, but almost no difference. Also, as you can see in the screenshot, when I had Direct Sound chosen, the sample rate was automatically set to match whatever the Windows settings were.

Also, I found out that if I let Finale sit for a few minutes and do nothing (after playback), it at least won't give me the clicking sounds for about 40 seconds, but then they'll start up again just like before.

Also, here is further information (which is also really bad news for me). When I create an audio file (WAV file) of the Finale file (of this strings file), the clicking sounds are also present in the WAV file. This is really bad. I don't know why this is happening. Compared to my old laptop, my new laptop has the same amount of RAM (16GB), a better processor (i7 processor instead of an i5), a better graphics card (don't know if that matters), and also has a solid state drive, like my last computer. I don't know anything about the sound hardware or how sound generation works with laptops. (Laptops don't have sound cards, right? That's only desktops?). Though if I recall, I think both laptops had "Realtek" audio. I don't know what hardware components could be worse on this laptop than the old one. Maybe the RAM is from a worse brand? Or maybe it's because it's a single stick of RAM? In my last laptop, I had 2 sticks of 8GB of RAM (high quality stuff I believe, G Skills Ripjaws). In this laptop, I believe there is one stick of 16GB of RAM. I don't know what the brand is.

I also might try another setting change. When I first got this laptop, the laptop was giving me a clicking/popping sound on audio and video playback - even outside of Finale. I then found that I had to go into some secret menu by pushing a secret button on the computer (really) and change the "slew rate for the ia domain" from 16 to 8. (From what I found, this is because "the CPU voltages ramp up and down very fast, leading to a crackling noise at every transition. The fix Lenovo implemented was simply to make those voltage transitions slower and therefore reduce/remove the crackling sound"). After I changed the setting from 16 to 8, the clicking/popping sounds went away. But in Finale they're still coming up. I'm going to try changing it back to 16 and see if that gets rid of the popping sounds in Finale. It's kind of counter-intuitive and probably won't work, but I might as well try it. (Of course, that will bring back the popping sounds in normal audio and video playback).

Further testing: The other day, I was working on a tuba quartet arrangement, and was getting some very slight clicking sounds, but nowhere near as extreme (or often) as in this strings piece. (Edit: I was just working on this arrangement tonight, and played through it several times, and had no clicking sounds).

I think it has something to do with the Finale and/or audio and/or MIDI settings in my new setup on my new computer. Both the tuba quartet file that was giving me very slight problems (at one point), and the strings file I attached earlier, are both files I have saved and edited in my new setup (with my new computer with the new installation of Finale). But when I open a file that was saved on my previous computer and previous Finale setup - the playback happens with no problems.

I have a feeling there must be something in my new setup, such as a MIDI setting or something, which causes these problems as soon as a file is saved. 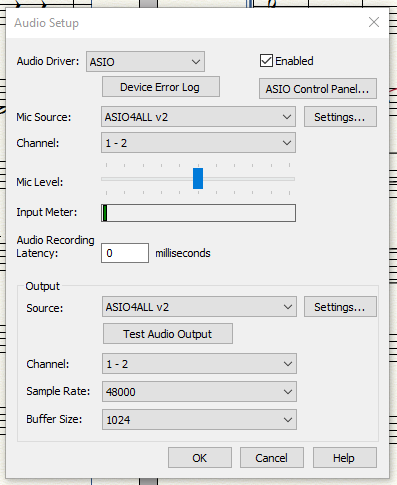 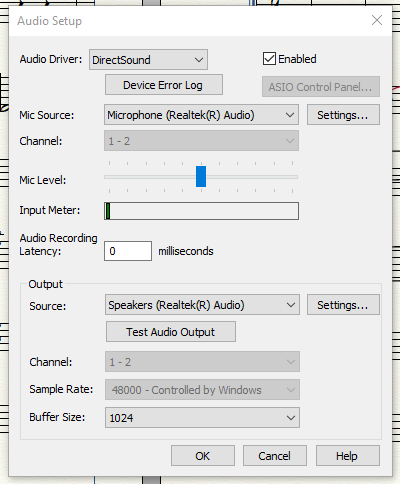 I still feel that the best solution is to set your Windows sample rate to 41000. That is what fixed things for me.