Post your wishes for future features in Finale here.

THE RE-ANIMATION OF FINALE

There is something special on the market going on, that -by all means- is creating a “buzz”...
You know; that just-released-notation-program from Steinberg: “Dorico”.
Although the application is not really “finished” and yet really useable for a big, serious work, the signs all point in the
direction of “New Market-Leader”. I’d say; in about one years time we’ll have a new “heavy-weight champion”.
(I tampered a bit with the Demo, and especially looked at Daniel Spreadbury’s introduction-videos...
having done that, I can just say: - it is extremely well thought through!! ).

Well, you could think; "so why bother anymore? ...Just go for it, then".
- Actually, I was pretty much thinking this myself, to be honest.
But, then one thought stroke me... and I can’t get this thought out of my mind;

I have been working with Finale since 1989, so - I can probably say - I know this program.
If I switch to Dorico I obviously will have to “dump” all of this (program-) knowledge,
which logically really ain’t something I’m looking forward to... So, my idea was to make this "last-desperate-try"
to Re-Animate and polish-up the Finale- Application, before "the market" kills it completely.

By all means; It is still an amazing Engraving-program! It’s just a bloody MESS, at the present!
"Bloated" is not even a word that would suffice to describe it... it’s way past that stage!
It desperately needs some redesign and slim-down work! ...or to define it better;
• The user-interface needs better user-friendliness !

Now, I ain’t a real programmer per se, and I don't know the source-code "setup" of Finale, so I can't tell what kind of effort the coding-work would be to change these things. But, I assume that it would be a very good help for MakeMusic (MM) and the programmer(s), if we -all together- really define what is "wrong" - and, most important; make a "picture" of how it should be.
This, then of course, by creating “mockup”-pictures of the changes... (so that we can see how it should look).
If then MM will implement these "suggestions" or not into upcoming versions; is not our decision ...but at least we tried.


I think one of the biggest issues that MakeMusic needs to clear for themselves is; "What does Finale really need to deliver" ?
Logically, I can’t speak for all users, since each and everyone has different expectations and needs whilst creating their scores.
Nevertheless; not seldom, I ask myself: "Is it really necessary to have the “one-app-that-can-do-all" ?
...instead of working with it a rock-solid Engraving-Work-Horse” ?
Is it really necessary to have built-in audio-engine support for “all” Libraries on the market? Is it even possible?
Doesn’t most people who actually do score “block-Buster-size” Film-scores (using "the Best" SoundLibraries), swap to a dedicated Audio-Sequencer when it’s time for “The Sound” ? Why not leave it at that, then?
And, instead - really concentrate on making a "more than descent" BUILT-IN playback-synth, that works 102% - with ALL functions! (except “super-realistic-sound”).
Concerning the givens, I bet that most scoring “based on sound/samples” will be done in Dorico in the near future. Not necessarily because it is better, but because Dorico has the "cubase Audio- Engine" under the hood. This is a pretty "heavy feature".
Finale doesn’t have something this heavy, by far ! But; Why bother?
Skip this (massive) field. Make the best out the situation (as you do, at the moment) by implementing “connecting-sockets”, like ReWire... etc.


I might be wrong, but my opinion is that Finale is still the most versatile engraving-application on the market for the engravers around. With engravers; I mean the "pro-users". Not the “once-in-a- while-creating-scores-for-my-students” user... no, the actual engravers; is it freelance or in-house.
If I were MM - I would desperately try to strengthen this market-position, albeit it being a ridiculously small niche-market, to keep supplying the needs for those engravers. ...They need Finale !!
Of course, there needs to be money coming in somehow, to keep things “rolling”... My view of this is a bit “unorthodox”, I guess - but I think that in the long run, it’s the only way:
If I was the “Marketing-Manager” at MM; I would push much more in advertising the application that is “small Finale” (is it called Finale Allegro?)
- The Application for a broad user-Base. Not just some teachers... but ALL Teachers !
The big “underline” in the advertisement should be something like;
"yes we CAN make difficult software too...but do you NEED difficult ?
And it has to be cheap! ...and most important of all - it has to DELIVER!!
If they could split their application-architecture this way - and make it really clear, there wouldn’t be any problems in Finale with the need to “make simple-entry items well visible - so that all new users can find them...” (sorry, just using this as one example - no pun using simple edit!)

I could do a comparison with a "normal" person believing that he could just jump into a F1-car and drive away like the pro’s.
NOBODY really believes that... do they? ...well - not any "sane" persons anyway. (if that is something good, I can't tell)

Sure; finding the steering-wheel isn’t that hard... but ...that’s about it, I think.
Compare this with Finale; to import a MIDI-File isn’t that hard to do either... - but then what??
...well, I’m sorry I think that MM has to politely ignore those (very naive) new users, who believe they can open up one of the most ridiculously complex softwares around, and "quickly" create a nice score... It just doesn't work. It SHOULD WORK in Finale Allegro, though!!! (never tried it).
Instead of a F1 car, give them a "juicy" offer to buy a dirt-cheap Mercedes.
..if this new user actually is serious about his engraving-intentions, the user WILL upgrade later; if the word has it that Finale "Is the real thing" (you have to get/remain there first).
To try to make Finale "for all" is really not the way to go!!! ..this is quite crucial, I think.

I was actually quite amused looking at a “Dorico-in-development”-video, where Spreadbury tries to explain that music-notation is tremendously complex !!
“there are SO MANY rules, and possibilities, that even the “best-of-the-best” don’t know them all...”
Well; how should it be possible to make an application handling all this, “simple for a new user” ?? (and, believe you me; Finale can handle just about ALL of these things, even if it’s quirky at times).

...As sad as it might be - I don’t believe Finale can be about “making big money”... Not anymore.
25 years ago - it was a revelation! - today, even freewares are quite good. - today, I believe Finale is more a "belief in our music-culture"...
Therefore; I urge MM to LISTEN to their users!! Let them do the “thinking” - and you “sell it”.

I will try to make some "photoshop-mockups" in the next days, and post some of the ideas here...
I politely ask you to look at all of these as they appear, and I would be glad if there could be some kind of thought-exchange, to make this REALLY good.
Mind you; this is NOT a "solo" - it should be a "grande Tutti - con forza" !!!

I sincerely hope it turns out great!
cheers

...directly after the introduction, I also upload a crude idea of where I am at the moment, in "mocking-up"...

I "stole" the Toolbar from Photoshop 4 (that I still use), and I must say - I CLEARLY prefer this light-tray look before all these dark-gray, or even black interfaces of todays applications. It's just timeless and functional. Just what we need.

I Sugest a Main Toolbar (with NO Title) that only can be turned off in the menus. The Playback-buttons should be treated the same way.
oh, and I clearly suggest to simplify the playback buttons/field to "basic" by default... and have additional options to be added, like time... sync... etc.
(I CERTAINLY don't think very many users actually NEED the time with a 1000th fraction to be rolling constantly...)

Biggest change, though - would be my suggestion to have a "Inspector-Frame" on the right. (Naturally, also to be switched off by needs).
- This "Inspector" shows what the Document-settings show now... but in real-time.
This would save a TREMENDOUS time of not needing to open windows and options all the time.
..
feel free to "rant"

*edit - now with the mockup-picture attached. (unfortunately only "under 100kb) - but you get the picture...
(ah, and BTW. The menu is a bit garbled at the moment. Ignore it!) 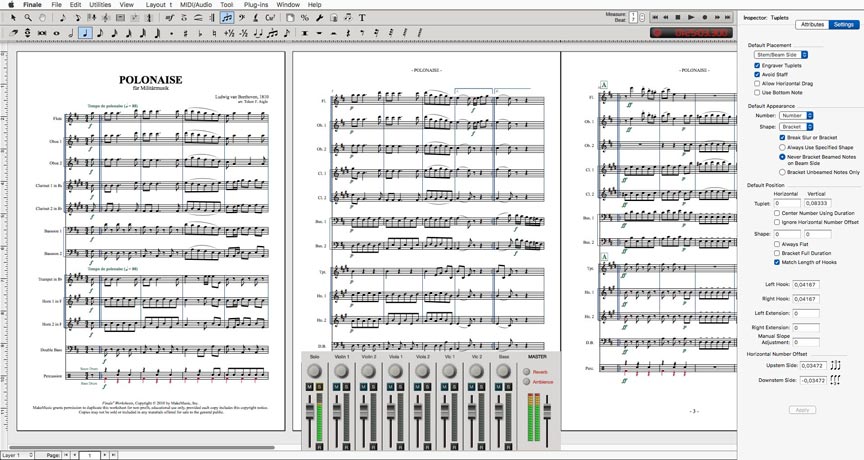 ...that's because I can't upload pictures...

1. I use a Mac so the apparent lack of floating palettes presents issues for me. I rarely use the palettes now actively (see 3.) but I want them where I want them, how I want them, when I want them.

3. I myself have no need for an Inspector, which takes up so much screen, but perhaps others would feel differently. I have all my document settings in templates and rarely change them. (Recently I switched to a keyboard macro style of using Finale with Keyboard Maestro and now rarely have to access options or use the tool palettes at all. They are there simply to confirm that I have selected the right tool. I would highly recommend this to all users and would be glad to give my keyboard setup if requested.)

So here are changes that I would like to see:

1. The palettes should be available in many sizes and styles and should be fully customizable. That is, the user should be able to design their own palettes, permanently eliminating tools they never use and combining tools from the various present palettes as they wish, so that workspace can be set up exactly as the user wishes.

2. Finale should have a more complete set of keyboard commands already in place for accessing all tools and the most commonly menu items such as "add measures" "change note size" "JW Change" used already in place. These should of course be easily customizable, like the current metatools.

3. The Finale document options and other defaults should be changed so that they are what one sees in the work of the best publishers. For example, the first and second endings should look like real first and second endings out of the box, without having to customize shape, position, font etc. The same goes for line thickness for all the various items, better slur shape specifications etc. Suggested settings for many of these are available at the Notat.io website. These changes could be made in hours by MakeMusic.
2014 Mac mini (OS 10.12) with dual monitors, Finale 25.5, GPO 4, InDesign CS4, SmartScore X Pro, JW Plug-ins, TG Tools, Keyboard maestro
www.cantilenapress.com