Is there a function for chord spacing (like music spacing) so that bars space out automatically in order to avoid chords clashing (pic attached). Thanks in advance.

The problem here seems to be the measures with Slash Notation, right?
My guess is that those measures do not contain any entries, right?

To get a better spacing you can add rests in the empty measures.

Where more spacing is needed, change a Half rest to two Quarter rests, then Apply Music Spacing, and Update Layout.

Where more spacing is needed, change a Quarter rest to two Eighth rests, then Apply Music Spacing, and Update Layout.

You can also try Document Options -> Music Spacing -> Avoid collision and check the box "Chords". But it won't do miracles.
Other suggestions :
• Resize the chords in the measures where there are 4 chords. Utilities -> Change -> Chords -> Scale Chords to : X
But this works with moderate reductions, otherwise the spacing of the elements of the suffix will look bad.
• Use another staff (no line, nothing) and use the resize tool to reduce it. Chords will space correctly. Group the staves.
• To save a little space, use the "subtext" alternate bass in case of a simple inversion (This is quite common practice).

There's also a good tutorial on this on OFNOTE.

Something I've been wondering about: Is there a difference between, say, C7/E and
C7
E
? When I have this situation, I'll do C7_E to create the stacked chord (is that what you meant by "subtext"?), but do some players read that differently? If so, what's the other interpretation?
Top

That is traditionally used for polychords. So, not C7 with an E bass, but C7 superimposed over an E triad.

Like Zuill said.
A chord over a bass NOTE will use "Subtext" as its alternate bass in the chord definition window (see image, where the 3 possibilities are visible). 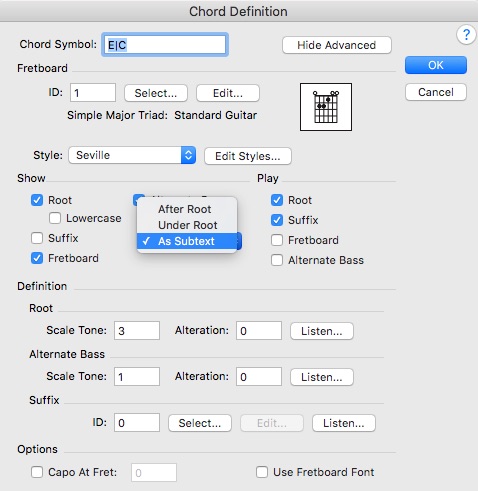 
In the case of subtext, the line will be oblique. For that reason, the whole chord symbol takes less space on the score. That's also a reason why the "After Root" option, C7/E (on the same baseline) is not used so much.