I'm trying out Finale 25, and have noticed that Garritan Ambience is missing, or at least no longer included with the Aria player. Can this be fixed by downloading the Garritan Ambience driver, which I've seen is available online?

Ambience is built into the Aria player interface rather than having a separate interface. I'd also possible to choose a convolution reverb.
A composer is a guy who goes around forcing his will on unsuspecting air molecules... often with the aid of unsuspecting musicians - Frank Zappa
Top

Thanks for the reply. I know very little about playback and reverb. Using the Aria player interface, what settings will give a result similar to Garritan Ambience?
Finale 2014.5
Windows 10
Top

You can get Ambience in the Aria Player window via the "Effects" button on the right. 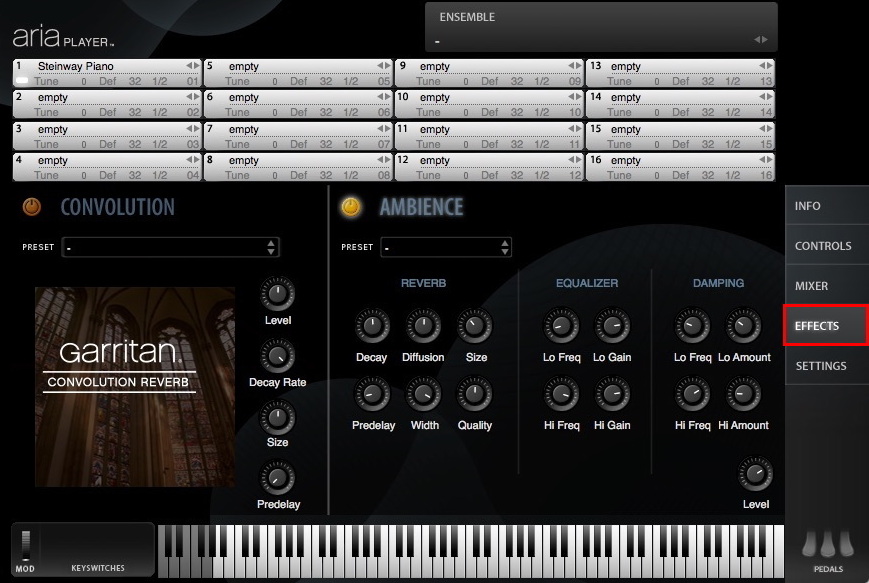 Thank you. I knew how to get to the Aria Player Effects window, but do not know which settings to choose for the various convolution and ambience controls. I realise it is probably easier to choose from the presets, but which of these will give me a result similar to the Garritan Ambience setting in Finale 14.5?
Finale 2014.5
Windows 10
Top

For the convolution ambience, I just try a short (4-8 measure) segment, all on one Aria player and see which I like best. The description of the setting is pretty close: clubs are low echo with short reverb times and caves sound hollow.

A convolution ambience is rather clever; it gives the effect of the instrument(s) being in a particular place. It's done mathematically. Instruments are recorded "dry"" with as little echo as possible. Then other recordings are made of echoes in a location; set out a few microphones and shoot a blank or clap hands or one strong stroke with claves or the like. Then (in the computer) a convolution between the echoes of the very short noise and a chosen instrument is computed. It's equivalent to what one would get recording the instrument in the chosen location.

Usually I just choose a setting that seems reasonable, somewhere between Jazz club and traditional concert hall. Sometimes when I feel ambitious, I'll use different locations for different instruments. I've also tried combining the convolution with the algorithmic ambience to tweak things but I'm not an ambience expert so this isn't always best.
Top
Post Reply
6 posts • Page 1 of 1