Today we have released Perfect Layout v1.2 for Finale®/Windows.
The update is free for all v1.0 users.

Since the v1.0 release three months ago we have added more than 140 free new features, improvements and fixes.
The full list of changes is available here.

Unfortunately we still don't have a release date for the MacOS version.
But it will now be our main focus until the end of the year.

If you would like to test Perfect Layout, you can send us your Finale file.
We will process it and return the result to you - free of charge.

My thoughts after using PL for some time now is, although I still don't get "perfect layouts" they are close. My recommendation is if you use TG Tools align dynamics plug-in you will benefit from using Perfect Layout. PL takes care of way more than just dynamics.
Finale 26 - Perfect Layout - Windows 10
President, The Shawnee Concert Band
Top

The best answer is to send PL a score and see if you like what it does. It has many, very many, settings. You can leave them on the defaults if you want to and it does a pretty good job. I don't know all the settings and mostly leave them alone.
Finale 26 - Perfect Layout - Windows 10
President, The Shawnee Concert Band
Top

do you have any examples of what you are looking for with vertical/horizontal alignment of articulations?
The plug-in removes many collisions by changing the vertical alignment, including most collisions with slurs, ties, tuplet brackets, dynamics and other articulations ("stacking of two articulations").

BTW, today on Cyber Monday the Gold version and all Gold upgrades of Perfect Layout are available with a 40% discount.

Jan, I would like to be able to easily align a horizontal series of finger numbers that I select. Also to align stacks vertically. There is a plugin to do some of this, but it is cumbersome. I was thinking that since Perfect Layout can avoid collisions between articulations, there might be a mechanism in place to do this.

Isn't that something that you can already do with the automatic stacking of Finale 26?

Can you post a before/after screenshot of what you're thinking of?
Top

Perfect Layout is a plug-in that is meant for processing a whole score (including parts).
It's not meant for usage on selected articulations only, though it's possible to also run it only individual measures only.
Some of the cases that you describe are pretty difficult to detect automatically (though not impossible, but difficult...).

The second beamed group (4323) is already processed correctly by Perfect Layout, if the default settings of the 432 articulations have the same default vertical offset (in that case I wonder how you get the result in image Before as it should already align correctly by default).
The last note (31) is handled fine by automatic stacking in Finale 26.
The 5142 and 4321 are difficult cases to be detected and handled correctly by default. Especially the 4321 which are all assigned to the first beat and shall be positioned horizontally although the beam is angled.

An idea would be to take the average of the selected articulations, but as far as I know it's not possible to detect in JW Lua which articulations were selected. Only the measure position of the selection can be read. But if the 4323 are assigned to the same measure position as the 3 (i.e. on beat 1), it doesn't work as the leading 3 might be taken into account too (of course, one could differentiate as it has a certain difference, ... but in detail it's not that easy to always detect and solve this case correctly).

Thank you for your patient explanation, jan. I am not looking for anything detectable or automatic, but simply the ability to align the finger numbers as I wish on command by selecting them in groups. I thought that Perfect Layout might possibly have some relevance, and it may, as you mentioned, help me on some cases, but it sounds like more of a Finale issue.

you mention that PerfectLayout CAN be used on single selected measures?
I didn't think this was possible. Is it new to version 1.2?
User of Finale since version 3.0 on Windows.
Now using a mix of Finale 2012, Finale 25, and 26.1
GPO, Garritan Solo Stradivari violin, Gofriller Solo Cello.
XSamples Chamber Ensemble.
New convert to NotePerformer3.
Top

Michel R E, this has always been possible. But it takes less information into account, so not all functions are performed.
You can also run it on single pages or a region of some staves and some measures.
And, of course, you can run it directly on one part only
OR on a staff plus its part(s) (if you select a staff only in the score).
Last edited by elbsound on Wed Dec 04, 2019 5:29 pm, edited 1 time in total.
Top

John, that's why I suggested JetStream. They do little handy scripts like this which are started by a keystroke.
Top

Yes, 4 3 2 3 should have been aligned by default. Make sure you're applying them with a metatool.

An alternative would be to do fingerings with expressions, which are easier to align, and which can be snapped to guide lines.
Top

I'm guessing Finale's designers reasoned that articulations apply to their note alone and are not related to one another. Whether that's true or not I'd have to think about, but I agree that it seems like articulations could have the same "align horizontally/vertically" functions expressions do. However, since that's unlikely to happen any time soon, if ever, maybe you could revisit your objection to expressions and we could discuss remedying those. They also have the advantage of being able to contain multiple characters, so your 4321 turn could be a single expression. 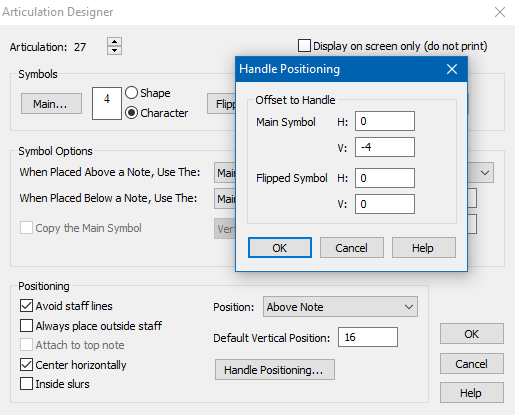 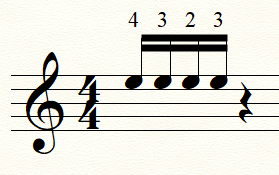 Thanks, Motet. I meant that I can't set the articulations to "above note", "below note" or any of the other options, because of the complexity of the fingering, which is sometimes over the notes in various positions, sometimes under the notes in various positions, sometimes next to the beam, sometimes next to the note head, sometimes beside the note, sometimes after the note etc. I am afraid that it would be impractical to have many meta tools to handle all the cases. Experimentation has shown that if I select one of the options or even have two sets of fingerings with two different options, I have to constantly correct these to meet the requirements, which is more cumbersome than if I simply place them manually.

So I actually have no real "trouble". It would just be more convenient if I could align some of the fingerings by selecting them and using a simple command.
2014 Mac mini (OS 10.12) with dual monitors, Finale 25.5, GPO 4, InDesign CS4, SmartScore X Pro, JW Plug-ins, TG Tools, Keyboard maestro
www.cantilenapress.com

Sounds like you need expressions, then. I see no advantage to articulations.
Top

Expressions attach to beats, and so should follow the notes (as a dynamic does, for example), unless I guess you're using the Note Position tool to move notes off the beat (in that case, consider using the beat chart instead, if you can).
Top